A legendary hidden rock hazard called “The Stallion” which rears up nearly 400 feet from the sea bed to the surface of Loch Fyne opposite Strachur is about to be reined in.

The treacherous barnacle-covered reef which is exposed only at very low tides is marked on the earliest charts as a threat to unwary sailors and several 19th century wrecks have been recorded in the vicinity.

Most of the local boating fraternity are aware it lurks just below the surface between Kenmore and Pennymore about 30 metres out from the shore. Old records refer to a warning sign in the shape of a white cross painted on a rock on the shore above the high water mark but it has either fallen into the sea or been worn away by the weather.

Robert Somerville of St Catherine’s almost came a cropper on it as he ferried a party of friends back from Otter Ferry during the recent spell of good weather. One of his passengers spotted it just under the surface and shouted a warning just in time.

Said Robert: “I knew we were in the vicinity of the rock and I wanted to pinpoint it for future reference. I thought it was just a loose clump of floating seaweed until one of the party spotted it submerged but visible almost beneath us at the right state of the tide to cause major damage

“In those circumstances it could easily have ripped the bottom out of the boat. I’ve sailed up and down that stretch of water for years and have looked out for it but never actually seen it above the surface.”

The rock, named “An Oigeach”, Gaelic for “The Stallion” on old charts, is the upper part of a cliff structure which attracts adventurous divers fascinated by its unusual subterranean ecosystems. 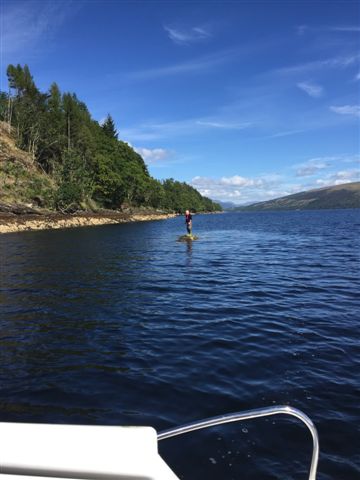 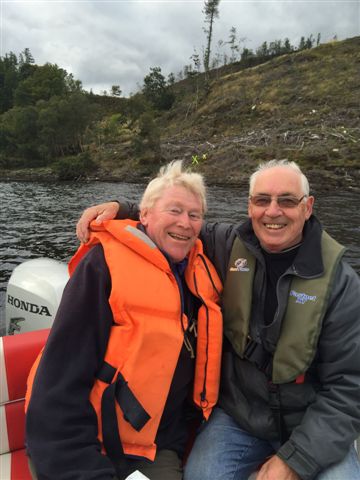 Ian Arnold, secretary of Strachur Bay Moorings Association, said the spine of the rock is shown on current Admiralty charts but no height above low water is noted.

He said: “The danger is there even for a boat with depth-sounding, as the rock, parallel to the shore, drops 20 metres almost immediately at both ends. On the outside, it drops very quickly to 50 then 80 metres. You can easily be on top of it if you are unlucky with the state of the tide. That whole area is nationally renowned for diving because of the steep drop and the various unusual forms of sea life at different levels.”

He added: “It would obviously be a good idea, if possible, to replace the old warning sign in some shape or form but it is difficult to access. Local people who know of the rock give the area a wide berth, but there must be plenty of folk who are oblivious.”

Robert and fellow boater Gerry Burke plan to drill an anchor point for a marker buoy or replace what appears to have been a fixed iron warning sign in earlier times.

The pair set out from Strachur pontoon last week to take advantage of very low tides and Gerry managed to land on the exposed reef after a tricky landing exercise which indicated a probable socket for an old stanchion sign drilled into the peak.

Gerry said: “We returned with the rising tide for a fun picture of me standing on the submerged pinnacle as if walking on water. The inevitable happened after I fended the boat away from the submerged rock while simultaneously trying to re-board.  A classic ducking followed which, fortunately, triggered the gas cylinder on my lifejacket and I was able to re-mount the rapidly disappearing reef for a more successful pick-up manoeuvre. The exploded interior of the lifejacket, however, leaves me looking like a cartoon daffodil”

Robert added: “We’ll be back with the hardware now we’ve got the measure of the beast …” 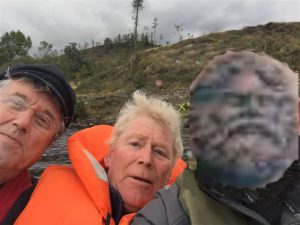 Herewith photos of our heroic adventure to the other world over there. Many a short-sighted simple soul out fishing will now be lured on to the infamous  Stallion, perhaps to join God Poseidon in the undersea world of conger eels, jelly fish, and everything but edible cod, haddock, and mackerel. This deed was ordered by God Poseidon, our Master, who entered our souls, when we were recovering from the Clachan on a good night not realising the horrors that befall those who prefer the Mermaid’s Lounge rather than the intellectual discussions by all the lawyers at the bar.