Boudicca, the cruise ship went up Loch Fyne this morning and turned just short of Dunderave Castle.
She did not linger at Inveraray of course, as there is no landing with the pier shut up.
According to the marinetraffic website she passed back down by Strachur at 1045hrs doing 16.7knots, heading for Tarbert.
Passengers would be put ashore in tenders at Tarbert. 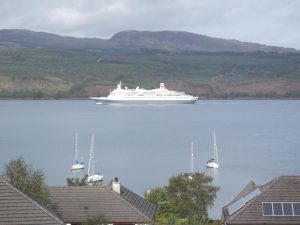