This guillemot came to me at the pontoon whilst I was draining the dinghy, and that is where I took the photos.
However, it paddled out behind me when I went to Aquila, although on the surface it could not keep up.
When it saw me on the stern, it dived and covered 30m like a torpedo, only to be disappointed by the dry biscuit I first offered.
I realised I had a tin of Tuna on board and opened that.
Now that was downed with little effort! 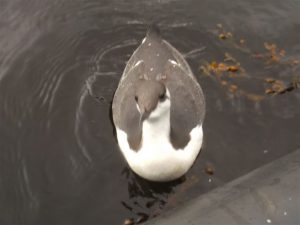 I think that it must be getting fed by what the pontoon fishers throw back.
I reckon more than half the fish get put back especially the smaller ones.
If they are somewhat stunned and slow to swim off, they will be Guillemot lunch.
But although further up the food chain than the fish, it may become Otter breakfast.
Hope not, it is a friendly little bird.