On Sunday 10 April 2016, a little later than planned, the pontoon was moved from its temporary moorings in Strachur Bay to its rightful position attached to the concrete anchor block on the shore of the loch,  which will enable the final stage of deck modification to take place.  An intrepid, if ageing, band rowed out to the pontoon for a briefing from Ian Arnold, skipper of the good ship “Pontoon”.  The briefing went something like this – “OK guys – pull the pontoon from one buoy to another and line it up with the anchor block.  Any questions?  No?  OK get on with it!”  Where upon the crew on the pontoon started pulling.  With the ribs at the back providing steerage the pontoon surprisingly started moving towards the first buoy.  It was noted at this point that the skipper – said Ian Arnold – had actually left the ship in his dinghy.  Either he didn’t fancy all the pulling on ropes or he thought it would be more prudent to be as far away as possible if it all went wrong.  The pulling rope was moved from the first buoy to the second and then the third and within a few minutes the pontoon was pointing right at the anchor block.  The ribs at the stern kept the whole thing in position and courtesy of Neil McKechnie’s tractor, the front was lifted up to allow the bolts to be attached securing the whole thing in position.   The anchors were attached with ropes on a temporary basis – this will allow adjustments to be made to the tension of each anchor and once this has settled down the permanent anchor chains will be attached.  On Sunday evening, until well after sunset, Clare Brathmere dived under the pontoon to make sure all anchor ropes were attached correctly and to the appropriate side of the pontoon. She was not completely alone down there, as she noticed a small stray garden gnome watching her, and we wondered if we could equip him with a facemask and snorkel, so that he can keep an eye on things below the pontoon?

Thanks to the combined community effort, the entire operation went remarkably smoothly and refurbishment of the pontoon will now continue. Fusion Marine (who manufactured and supplied the pontoon) has a few days’ work to do replacing deck planks and installing a handrail. In the meantime, the pontoon is CLOSED to the public and members of the association.  It should reopen by the end of April, early May. Thanks for all the help and assistance to Allan Clark, Carol Campbell, Clare Brathmere, Gerry Burke, Tom Hill, Richard Scott, Lindsay Walker, Ian Arnold and Neil McKechnie. Many thanks go to Hazel Logue for taking the photographs. 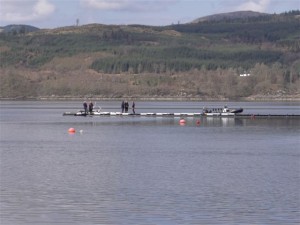 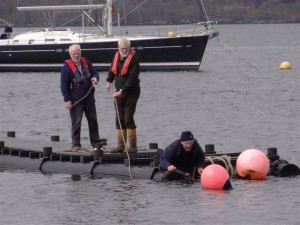 2 I can nearly reach it…. with my teeth! 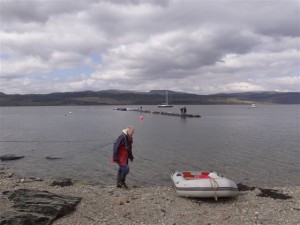 3 Last bight…..I think I will leave them to it! 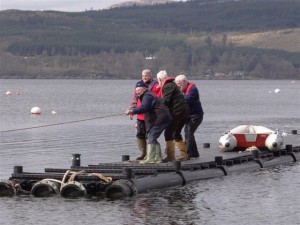 4 Some pensioners converting their ‘Offshore assets’ 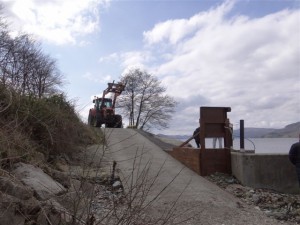 5 The cavalry arrives over the hill 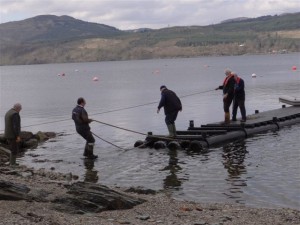 6 Almost there… on the rising tide…. of optimism. 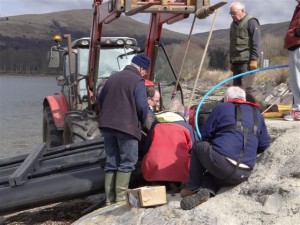 7 If enough of us look at this hard enough for long enough…. 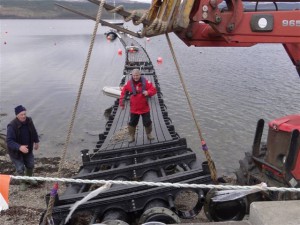